“Go and set the world on fire.” Those simple words from St. Ignatius of Loyola, whose feast day is today, colored all of his works, most notably the establishment of the Jesuits, among whose leading contributions is Catholic education. 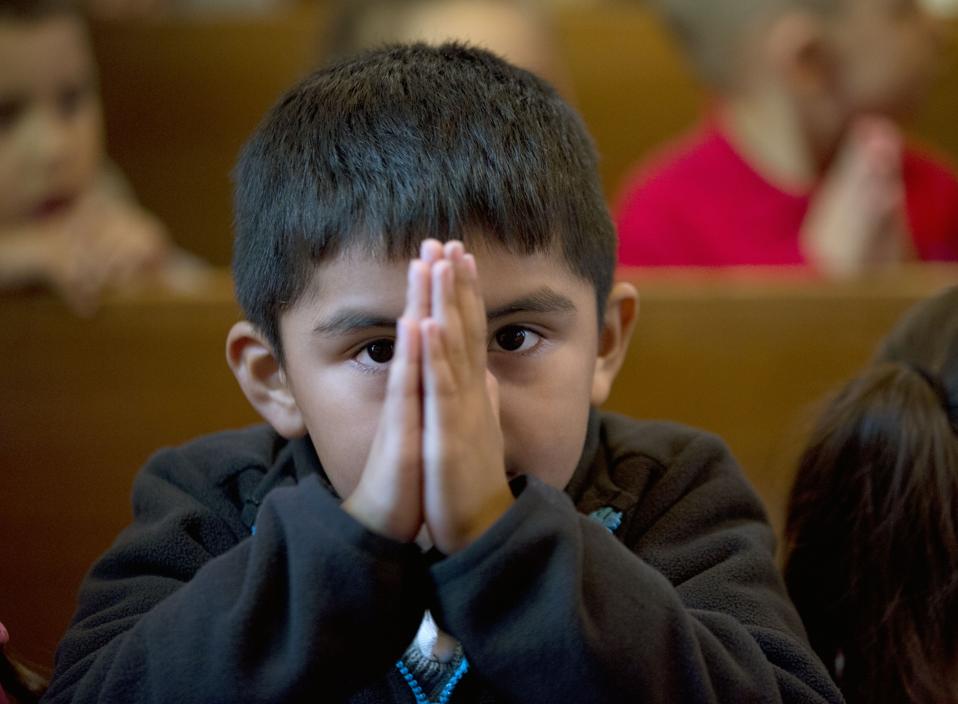 Boy holds his hands together and prays.
Getty

“Education in the Jesuit tradition is a call to human excellence,” according to Fordham University, considered a premiere institution of higher education. “It develops the whole person, from intellect and imagination to emotions and conscience, and approaches academic subjects holistically, exploring the connections among facts, questions, insights, conclusions, problems, and solutions.”

Their focus, as is the focus of most Catholic-inspired schools, is the whole person, no matter whether the person is Catholic. Catholic educators are ‘catholic’ with a small C, meaning “according to the whole,” or, of all things. That’s why Catholic schools are recognized as being the best educators of students with lesser means, dating back to their full embrace of poor, unwanted immigrants who came with a Catholic faith that was then eschewed by white protestant society, to today’s focus on students most in need, 19 percent of whom are not Catholic.

Among the many tenets of teaching advocated by Saint Frances “Mother” Cabrini in founding the first schools for the poor in New York City, she counseled the teachers to:

Safeguard the children confided to you as on precious loan.

Study well the personalities, the strengths of the students, because one cannot presume they are all the same. Treat each one according to their capacity and the gifts they have received from God.

Do not embarrass, correct patiently.

Do not show dislike either in words or actions.

Do not speak of the students’ defects to others.

Use all possible diligence to plan your schoolwork at the beginning of the year. Always be ready to answer to educational authorities and satisfy the families of the students.

And indeed, the contributions of these revered Catholic institutions are well known through the product of their teachings, respected entertainers, business and political leaders alike:

Each of these graduates - most of them from modest, if not downright poor backgrounds, regardless of their level of devotion or acceptance of their faith, have acknowledged the powerful impact of their Catholic schooling.

It’s often called “The Catholic School Advantage,” and the results of students attending them is well documented. A 2018 study found that  “...students who attended Catholic high schools had higher college grade-point averages (GPAs), were more likely to graduate, and were more likely to graduate with a STEM degree. This Catholic school advantage was wide ranging, benefiting many subgroups of students, including non-white, low income, urban, and low-achieving students.” Catholic high school graduates are also more than twice as likely to attend college.

Catholic schools have lower administrator-student ratios, lower costs (often too low to sustain them), a smaller achievement gap, and are more diverse socioeconomically.

On the National 2018 Technology and Engineering Literacy (TEL) assessment, focused on critical STEM skills, students in Catholic schools performed better than those in public school.

Catholic schools enroll 10 percent of all students in the country. Fully 40 percent of them serve either urban or inner-city areas, while another 22 percent serve rural populations. These schools, and  some in suburban settings, have student bodies that often skew toward the lower end of the economic scale. 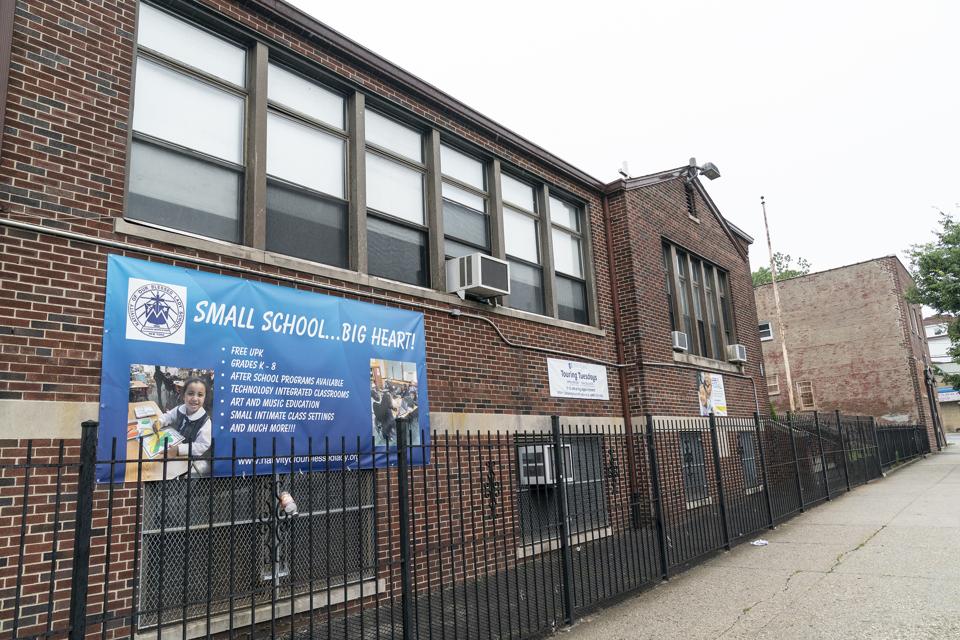 NEW YORK, UNITED STATES - 2020/07/10: View of Nativity of Our Blessed Lady in the Bronx slated to close as Archdiocese of New York and Brooklyn Diocese to shutter Catholic schools. Schools will not reopen due to the pandemic. The Diocese of Brooklyn and the Archdiocese of New York blame low enrollment and financial issues caused by the COVID-19 outbreak. Majority schools slated to be closed located in areas most hit by virus. (Photo by Lev Radin/Pacific Press/LightRocket via Getty Images)

The parents, grandparents and guardians of these students were among the first to be hit by mandated business shutdowns because of COVID, and they remain the most seriously impacted by the economic destruction the shutdowns brought on. If they are ever able to return to their jobs, there is a decent chance that at least for some time, wages will be below the level of when the shutdown occurred.

And yet, not one of the rich and famous who could do so, has stood up to advocate that we plug the dam on the disaster we now face, the closing of Catholic schools, which just this year reached 140, mainly because of Covid’s impact. No longer open, no longer able to expect monthly tuition checks, monthly church contributions or donations, and no longer able to pay their staffs, Catholic schools are perhaps the second most tragic institutional victim of Covid, next to employment.

The shutdowns have wreaked havoc on the ability of lower and middle class working folks to afford continuing their kids’ Catholic education. Thomas Carroll, Superintendent of the Archdiocese of Boston, put it succinctly in a recent conversation, “We didn’t cause this problem – the government did. There is a direct cause and effect between the shutdown and the looming collapse of some Catholic schools serving those most in need.”

His message to government is clear, unambiguous and unarguable – “you broke it, you fix it.”

Boston’s Catholic schools under Carroll’s leadership are opening physically and on time, offering that option to parents who want to send their children back to school.  But Boston public schools are not opening on time, and when they do, there will be no in-person option. If we measured our delivery of federal funding on results only, the balance sheet would favor Catholic schools. And it wouldn’t be close.

Paul Escala, Superintendent of Schools for the Los Angeles Archdiocese has noted that the average cost of attendance in his Catholic schools is just $6,100 per student, versus more than $13,000 in the neighboring public schools. Their student bodies are 78 percent minority and 20 percent non-Catholic, yet when federal CARES Act funds were allocated to states this spring and Catholic schools sought a proportionate share, state leaders ignored them. Interest groups called such a request a “back door” attempt to injure the public schools. (Many Catholic schools received Paycheck Protection Program funds.)

In Espinoza v. Montana Department of Revenue, the U.S. Supreme Court on June 30 ruled that Blaine Amendments, created to discriminate against Catholics, when used to prohibit parents from making choices of religious schools are unconstitutional. That 37 states have such amendments should be concern enough for advocates of equal access. These amendments will soon see their demise state by state, opening up the path for more opportunities for expansive options, including Catholic schools.

Until then, however, we must recognize that Covid is not a schools issue, but an economic issue. Any institution that is failing as a result of Covid-impact should qualify for funds. The CARES Act funds, intended to rescue or at least plug an ailing economy, were intended for all organizations that impact the nation’s economic and social fabric. But attempts to access the $13 billion reserved for K-12 education for Catholic schools were met by hostility.

And what a pity! It turns out just two percent of those funds have even been drawn down by the public school monopoly that sought to protect those funds, because, according to the American Association of School Administrators, they were waiting for more money. Such irresponsible behavior during that time has contributed to the closure of more than 100 Catholic schools which could have been saved if just ten percent of those funds had been distributed to them.

Today there’s a huge debate raging in Congress about the next stimulus package. According to FutureEd, “the Senate is now considering a new round of funding that could bring as much as $70 billion to states for stabilizing elementary and secondary school budgets. But provisions for private school funding and money tied to reopening schools could complicate its passage.” While requiring schools to reopen as a condition for receiving funds, private schools could count on up to ten percent, which is the proportionate share of students they serve. But why are there complications to include private schools? Because, the opponents argue, they don’t serve everyone.

We don’t ban a bar from getting funds because we may not drink, or a hospital because we may not be sick, or any number of the millions of businesses and people that qualified for federal stimulus funds. Banning Catholic schools from similarly receiving support, considering their public good and their record, is neither logical nor moral. Existing opposition to funding for Catholic schools is rooted in discrimination. These schools save American taxpayers $21 billion per year with achievement rates often twice as high for students who would otherwise be attending inner city public schools.

Thousands around the country are—in the words of St. Ignatius—rallying to “set the world on fire,” to ensure the 1.7 million deserving school kids across America whose choices put them in Catholic schools are able to continue their education.

The nonprofit organization I founded, the Center for Education Reform, encourages grassroots advocacy that favors scrutiny of teachers’ unions and supports school choice among public, private and charter schools.

When the Archangel Gabriel told Our Lady that she was to bear the Son of God and name Him Jesus. Mary completely surrendered herself to the Divine Plan in what is known as the Fiat.